Man is about to step foot on the moon as Sharnie Burley takes her first steps into high school with its new rules, new subjects and the challenge of making new friends.

Sharnie's view of the world is widening. As the Vietnam War rages overseas, people at home in Australia are protesting in the streets against the war and sending young men to fight without having a choice (conscription). Opinions are dividing society and friends are becoming enemies at school. There is conflict in Sharnie's family too when her big sister Cas gets involved in anti-war protests and upsets their father who believes fighting for your country is an honour. Sharnie wants to share her worries with Gran, but her beloved Gran is fighting a battle of her own. Along with Gail, her unlikely new friend, Sharnie finds her voice through art and begins to make her own mark on the world.

Footprints on the Moon by Lorraine Marwood is a verse novel with many layers skilfully and sensitively woven together using beautiful imagery linked to the moon landing.

Thank you for the copy of this book to review University of Queensland Press. 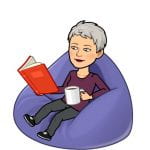 2 thoughts on “Footprints on the Moon by Lorraine Marwood”