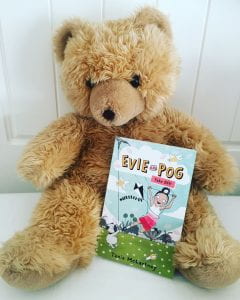 The star of @wildaboutb00ks is Book Bear who loves to snuggle with readers big and small as they read and listen to stories...

My little bookish piece of the internet at Wild About Books is celebrating it's first birthday today!

Thank you for following along or popping in to read my book recommendations. I hope I've helped you discover some great books to read.

Here's to another year of reading and sharing fabulous kids' books with you... 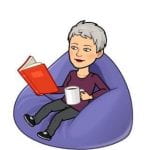 This week I was honoured to be invited to talk about Books for Younger Readers at the CBCA Victoria's 'Clayton's Night'. It was a big challenge to only choose six of my favourite books from last year! We are lucky to have so many talented Australian authors writing books that make us laugh, spark our creativity, inspire and empower us. 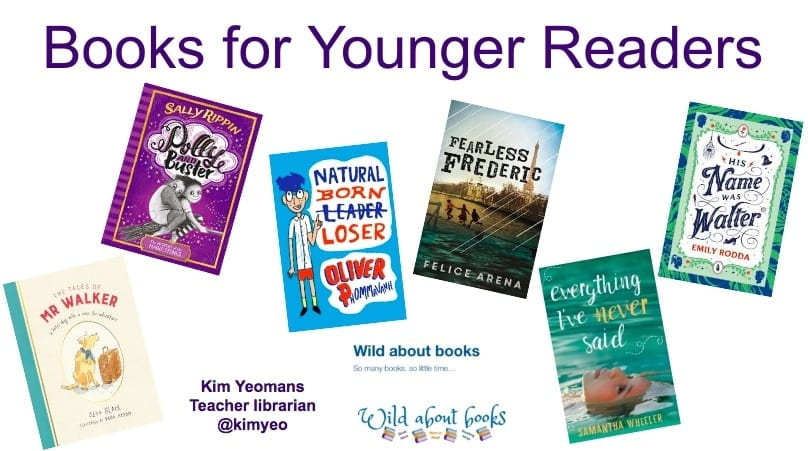 These are the six books I chose and I have also written about them on the Wild About Books blog...

The Mystery of the Magic Stones by Sally Rippin

His Name was Walter by Emily Rodda

Some other books I would also include are...

The Book of Answers by A.L. Tait

Lenny's Book of Everything by Karen Foxlee

I wonder which books you would include in your favourite books from 2018... I enjoy listening to podcasts when I'm out walking and because I'm wild about books, most of the podcasts I listen to are about books!

One of my favourite podcasts about children's books is One More Page which is hosted fortnightly by three fun, book-loving ladies who also happen to be authors.

I regularly laugh out loud as I'm walking and listening to Nat Amore, Kate Simpson and Liz Ledden. Their One More Page podcast is chock-full of entertaining interviews with authors, illustrators and other people from the book world. Whatcha Readin? will have your TBR (To Be Read) pile growing into Mt Bookerest! There's bookish fun in Kids Capers, competitions to win great books and you can hear about upcoming book events. I also look out for Marianne Khoo's vibrant illustrations of each podcast's theme. What a talented team at One More Page!

You can also listen to the podcasts HERE on their website and find more information in the Show Notes.

You shouldn't, but if you need one more reason to listen to One More Page...their guest author for Episode 25 on Wednesday, February 13th will be Tim Harris whose new book Mr Bambuckle's Remarkables On the Lookout is out now!

Thank you One More Page for highlighting kids' books and reading in a fun and engaging way and making this teacher librarian's heart sing!

On Saturday, The Little Bookroom celebrated it's 58th birthday with it's inaugural Kids Books Fest. It was a day of celebrating books and reading with a session for young readers in the morning and I attended the afternoon for primary school children.

(Watch in full screen by clicking on the square)

By 2pm everyone was seated and eager for our exciting afternoon to begin...

Author vs Illustrator Debate
We were treated to a lively debate between author and illustrator partners  chaired by Peter Helliar (Frankie Fish series). The panel was made up of Danny Katz and Mitch Vane (The Little Lunch and Poppa Platoon series), Andrew McDonald and Ben Wood (Real Pigeons series) and Andrew Hansen and Jessica Roberts (Bab Sharkey and the Animal Mummies series). They had to convince us which is more important - words or pictures? What do you think?

Illustration Battle
The illustrators battled each other under extreme pressure with just THREE minutes to draw requests from the audience! It's not easy drawing a moth with cheese for antennas or a zombie unicorn with a banana horn. Mitch Vane and Ben Wood's illustrations were so close they used 'Paper, Scissors, Rock' to decide the winner! The final result was a draw between Mitch Vane and Jessica Roberts.

Total Quack Up!
Sally Rippin and Adrian Beck are the editors of Total Quack Up! They wanted to do something to help raise money for Dymocks Children's Charities who provide books to children who don't have access to books. Sally and Adrian approached eight author friends to write a funny story for the book and James Foley to be the illustrator. All of these generous people donated their story and illustrations to create this book. Total Quack Up! is guaranteed to have you laughing and quacking up! Buying a copy means you will be helping other kids to have books so they can enjoy reading too.

We had laughed lots while listening to Adrian and Sally read 'Who Blocked Up the Dunny?' written by Ella Wallace who won a competition to have her story published as James Foley illustrated the 'unplugging' part of the story.

Gastronauts Launch
James Foley launched his book Gastronauts which is the third book in his Sally Tinker series. We were all blown away when James showed us his dummy book of illustrations that stretched across the front of the room and round the corner!

In Conversation: Sally Rippin and Elliot Perlman
Elliot Perlman is a famous author of adult books who has written his first book for children called The Adventures of Catvinkle Elliot told Sally that Ula the dog in the story is based on his dog called Ula when he was growing up. The children in the audience were very lucky to be the first children to hear Elliot read his book aloud - what a treat it was!

A BIG thank you to Leesa and the staff of The Little Bookroom and all of the authors and illustrators for a fabulous afternoon of celebrating books and reading. See you next year!

The Little Bookroom is thrilled to present its first Kids Book Fest!

Come along on Saturday, October 13th to the Fitzroy Town Hall's Grand Ballroom to celebrate reading, writing, illustration and creativity and meet some of our talented Aussie children's book creators.

October 13 also marks 58 years since the doors of The Little Bookroom first opened. The Kids Book Fest is a fabulous opportunity to celebrate the way this amazing kid's bookshop has been bringing kids and books together!

The Kids Book Fest has two sessions with a Storytime Spectacular for Little Kids and an Epic Extravaganza for big kids.

You can find more information and book your tickets HERE.